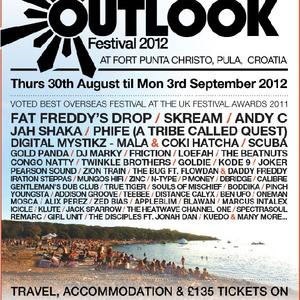 When Fort Punta Christo was built on the Croatian coast in the eighteen hundreds, it was most likely not with the intention of it being turned into a banging party venue every summer hosting one of Europe’s best festivals. Fortunately for us though, this is exactly what happened and since 2010 the abandoned fort has played host to Outlook festival, awarded “Best International Festival” at this year’s UK Festival Awards. The festival itself has been going since 2008, taking place in different locations across the Croatian coastline. With a promise to make 2012 the best year so far, the team behind the growing success have set out to create a festival experience you won’t forget.

Taking place on the 30th of August until the 3rd of September, Outlook is one of the last festivals of the season, perhaps that last bit of summer fun you’ll have before diving head-first back into autumn. Whilst festivals in the UK usually leave you knee-deep in mud, Croatia is a prime location for a summer festival with guaranteed sunny vibes. Pack your bikini; leave the Wellies behind – easy. It’s hard to think of a better combination than sunbathing and going swimming in crystal clear water in the day, and then dancing to some amazing live music all night (and morning) long. To whet your appetite, take a look at the 2011 Highlights – you can almost feel the warmth of the sun on your skin.

Music-wise, Outlook brings you some of the best acts from the genres of Dub and Dubstep, Reggae, Dancehall, Drum & Bass, Hiphop, Roots, Soul, House, Techno, Garage, Grime and Electronica. Last year’s edition saw big names such as Pharoahe Monch, Johnny Clarke, Scuba and Shy FX and this year’s line-up is looking pretty promising too, to say the least. Amongst the headliners is Fat Freddy’s Drop, an eclectic seven-piece band formed in the late 1990s in Wellington, New Zealand. Their musical style has been described as Dub, Reggae, Soul, Jazz, Rhythm and Blues, and Techno – combined. Not to forget, the final ingredient in this mix is a love for music, creating a live show not to be missed.

Next up, it’s a familiar name for all you Dubstep fans out there: Skream. Originally from Bromley, this guy has been producing since the age of 15. His break-through came in 2005 with ‘Midnight Request Line’. He is perhaps most famous however for his remix of La Roux’s ‘In for the Kill’ and also for constituting one third of the DJ trio Magnetic Man, together with Benga and Artwork, whose hit ‘I Need Air’ has been blowing speakers all across the country.

From Bromley to Jamaica, from Dubstep to Reggae, Rastaman Max Romeo will bring the festival goers some slower, sunnier jams. His 1969 rude reggae hit “Wet Dream” reached number 10 in the UK charts despite a total radio ban. This year at Outlook you will also be able to catch Jah Shaka, who has been running a London-based roots reggae soundsystem since the early 1970s and released music from Max Romeo on his own record label.

If you’re heading to Outlook from Glasgow, you won’t be going alone. We at GUM have always been proud to share this city with some of the best artists and DJs the UK has to offer, at least in our opinion. Coming from Glasgow to Outlook this year is famous DJ collective Mungo’s HiFi, who have featured in GUM interviews before and can be seen playing all around town regularly. Mungo’s will be accompanied by beat masters ChungoBungo and also singer Soom T. Be prepared, when the three of them played Chambre 69 together a while back the roof nearly came off.

In addition to the Glasgow natives, Outlook 2012 features a bunch of DJs who have played here in Glasgow earlier in the year. Mosca helped the Vitamins guys out in La Cheetah back in February, Eliphino played at newcomer Rubix in SubClub and Girl Unit, Zed Bias, Phaeleh have all played Bad News in The Arches. Worth mentioning are also Ben UFO and Pearson Sound who have both been spinning records together with Glasgow label Numbers.

As if the music wasn’t reason enough to bag yourself a ticket, because of its location Outlook has the potential to be part of the summer holiday of a lifetime. Croatia is famous for its beautiful islands and sailing trips and many festival goers will chose to include some island hopping, boating or road tripping before or after the festival. This year, there’s even more reason to hang around for a bit since the team behind Outlook is expanding with a new festival. Dimensions Festival is Outlook’s more electronic and underground baby sister, taking place in the same abandoned fort just a few days later. You can get a combined ticket for both for £230, which is a good deal for two amazing music festivals. Stay tuned for the GUM preview (and review!) of Dimensions festival.