[Written by Flora Anderson] [Image by Anna Shams Ili] In 2017 Hanson Robotics’ social humanoid robot Sophia was granted citizenship in Saudi Arabia. Sophia is very human-like in appearance: she can speak, move her face realistically, recognise other faces and even cracks a few jokes. It is strange, perhaps that the world’s first ‘female’ robot citizenship is granted in a country where many women still have to ask permission from their male relatives to leave the house. Despite this, is Sophia really the intelligent, conscious machine that she seems? [Written by Katie Veitch] [Image by Grace Elder] It can seem completely intuitive to us that we do indeed have free will. Surely, it can only have been my prerogative, and nothing else, that led me to buy that vintage Louis Theroux T-shirt for £35. There can’t be any pre-determined reason making that an inevitable decision, right? To clarify, free will extends to more than just clothing choices; free will is the ability to have many choices in front of us and to pick one without any external influence. It’s the ability to be the playwright of our own life, instead of the lead actor. However, when we look into the science behind these concepts, it seems that there really may be an explanation for everything we do and think. [Written by Annegret Maja Fiedler] [Image by Annegret Maja Fiedler] “I thought you were going to study fine art,” says a former classmate. I wince in pain. I thought I was going to study fine art, too. Drawing has always been an escape for me. If I would not have moved away from Berlin before completing high-school, I would not be studying marine and freshwater biology at university. In the past, I have felt trapped between two different worlds, art and science. [Written by Rowen Leverntz] [Image Credit: WikimediaCommons//Illustration from Brockhaus and Efron Encyclopedic Dictionary] Art can be seen as an expression of human imagination that creates an emotive response, and science is exploration and discovery of the human mind. Both surround our own perceptions of life from the mind itself, meaning there must be some comorbidity or connection. I believe we find art so impactful because of its innate interaction with science: the relationship between the two is a layered question, as the effects of experimental art and biological composure consistently overlap. We may be drawn to art itself through the paradox of familiarity and discovery. 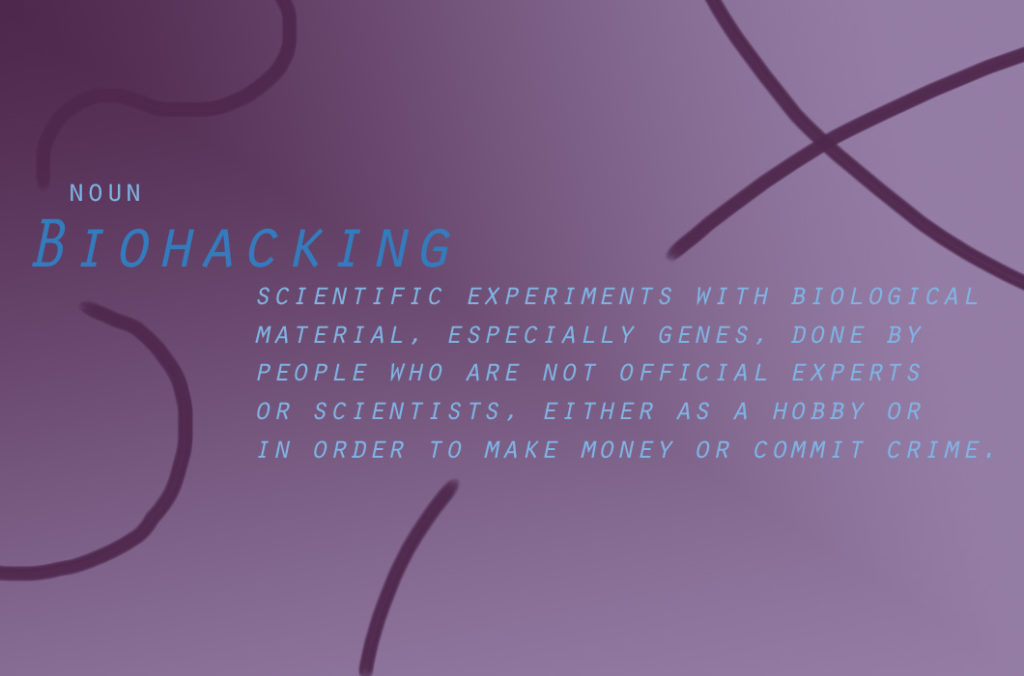 [Written by Vaiva Gikaité] [Image by Aike Jansen] “Biohacking” might sound like science fiction, but lots of people are already doing it to some degree. It’s arguably even becoming necessary to in order to keep up with the pace of modern life. [Written by Annegret Maja Fiedler] [Image by Kate Zápražná] DISCLAIMER: This guide does not encourage drug use and is for educational purposes, only. The supply, possession and consumption of any form of drugs can lead to serious legal consequences, emotional damage and death. [Written by Natalia Melenteva] [Image by Anastasija Svarevska] “I like them to talk nonsense. That's man's one privilege over all creation. Through error you come to the truth! I am a man because I err!”  “What do you think, would not one tiny crime be wiped out by thousands of good deeds?” Crime and Punishment, Fyodor Dostoyevsky, 1866 [Written By: Joanna Ashby] Research into Brain-Computer Interface (BCI) technology is one of the most exciting and rapidly-advancing frontiers in Bioengineering – ranging from efforts to reverse blindness, deafness, and paralysis, to detecting consciousness in patients suffering from ‘locked-in’ syndrome, where they are unable to move or communicate in any normal way. The brain will always capture the attention of the scientific community – and it is in Silicon Valley, a centre of innovation, entrepreneurship and technology, where Matt Angle is conducting his research in the field. [Written By: Joanna Ashby] [Photograph: Dr Catherine Juillard] Glasgow is blessed with a rich history of science discovery, innovation and progress, led by some of the greatest scientific pioneers on record - both old and new. It is less a question of finding work to feature, and more a case of seeing how much we can proudly present within the constraints of the time available. One exciting thing to look forward to is an inaugural year-long series special on Global Surgery. Five billion people, more than two-thirds of the world’s population, do not have access to safe and affordable life-saving surgery; whether that’s for a difficult childbirth, a road traffic accident or for cancer. This theme was selected not only because of its nature as a global humanitarian imperative, but also because it spans every area of science and will require organised interdisciplinary and international effort to tackle… and most importantly - by us. Without further ado, thank you to our first global surgeon – Dr Catherine Juillard from San Francisco, California.

Almost every year the same topic hits the headlines – the serious and pressing issue of air pollution in cities across the UK. Since 2010, the UK has exceeded the EU nitrogen dioxide (NO2) pollution limit every year, often or not within the first few weeks. In London, this troubling pattern continued into 2017, this time breaching the limit in just 5 days.

In 1945, Jimmie G. was nineteen years old. He had his whole life ahead of him – the Second World War had just ended and Jimmie had his choice of what to do now. He could stay in the navy, where he had been thriving since he was conscripted at seventeen and keep working as a radio operator, or go to college. Years of peace stretched out ahead of him and Jimmie felt optimistic. He was young, bright, charming, totally in control of his future and flushed with the thrill of being part of a historic victory at such a young age. For now, though, he was talking to a doctor, although he wasn’t quite sure about what. But when the doctor held up a mirror, Jimmie’s easy confidence and light-hearted manner dissipated – what he saw was not a teenager, but the face of a man in his late forties, still handsome, but most definitely old, distinctly old. Jimmie was not dreaming, not in a nightmare. He was, in fact, forty-nine years old and it was 1975, and he was in the office of neurologist Oliver Sacks. Jimmie G. had severe amnesia. He remembered the events up to the year 1945 with exceptional clarity, but the rest of his life was a total blank, dissolved in the deep recesses of his mind. He was almost completely incapable of forming new memories, although occasionally he could recall recent events in a hazy way. Unable to remember his experiences of the present, Jimmie’s mind had latched on to what it could remember – his past – and created its image around him, even in the face of overwhelming evidence to the contrary. Jimmie was living in a world of his mind’s creation – something that, though it sounds extraordinary, is not at all unusual.