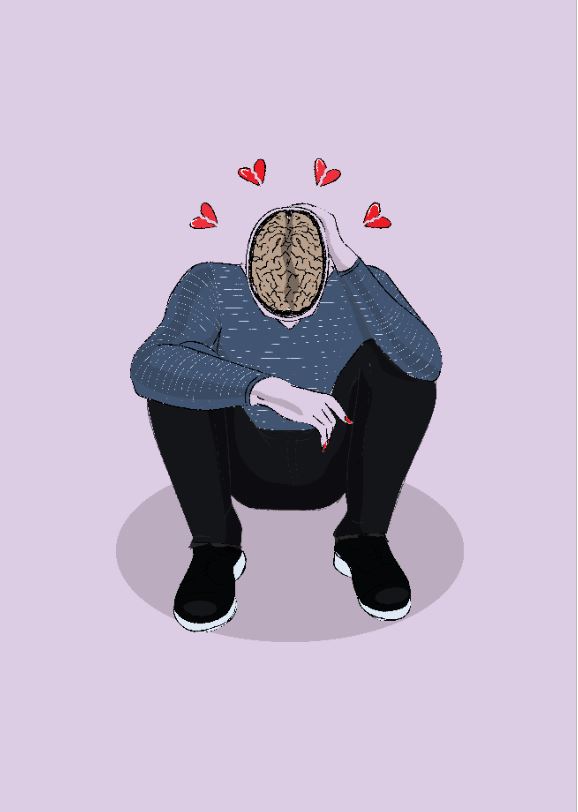 Romantic love is intangible, universal, and ineffable. With the euphoric highs come the crashing lows – the torment of heartbreak. Although seeming to transcend any true boundaries of definition, the intricate mechanisms of the human body can provide a physiological explanation for the pain.

To properly understand what happens to our body during a break up, we need to know what happens when we fall in love – or at least when we become deeply infatuated with someone. Have you ever wondered what is actually going on in your brain when you meet someone you fancy?

In a chemical sense, when we see someone we are attracted to, the hypothalamus stimulates the production of the sex hormones, testosterone and oestrogen. This concoction of chemicals plays a role in increasing our libido, an initial sexual desire.

The initial stages of falling in love are driven by a naturally occurring amphetamine called phenylethylamine (PEA). This chemical sparks that first rush of excitement.

In the words of Sigmund Freud: ‘Isn’t what we mean by ‘falling in love’ a kind of sickness and craziness, an illusion, a blindness to what the loved person is really like?’ Similar to other mind-altering substances, PEA changes our perception, making us view our partner with ‘rose tinted glasses’, their flaws are suddenly non-evident.

In the beginning of a new relationship, the levels of dopamine in the body tend to be very high, reinforcing the chemical reward system. However PEA wears off within 12-18 months, the end of the ‘honeymoon period’,  the body simply cannot maintain such intense infatuation long term. Yet this ending can ignite the intricacies of the romantic love reward system in our brains.

Following the circulation of PEA, the neurotransmitters norepinephrine and dopamine are released. Norepinephrine is a stress hormone that causes sweaty palms, hyperventilation and butterflies in your stomach. Dopamine: a feel-good chemical, fundamental in the brain’s reward system.  Together these chemicals craft the sensation of pleasure and satisfaction, it’s release is the brain’s response to addictive stimuli. Naturally we sought to do things that will cause its release and recreate that feeling; effectively becoming addicted to ‘love’.

Brain scans of people in love have shown that the primary ‘reward’ centres of the brain -including the ventral tegmental area (VTA) and the caudate nucleus – are heavily stimulated when shown a photograph of someone they are intensely attracted to. In this period our brains are saturated with the ‘cuddle hormone, oxytocin, which solidifies the attachment we make with our partner. Interestingly, the average relationship length in the UK is two years and nine months, suggesting that many people choose to end their relationship after the dopamine high wears off.

There isn’t a rehab for the heartbroken – apart from perhaps dating apps and club nights  – but our tendency to ‘pair bond’ has the unfortunate consequence of ‘love sickness’ – the uncertainty of whether our feelings of love are reciprocated. This feeling of being ‘lovesick’ can be seen as a withdrawal syndrome – our body is craving the amphetamine rush that we once got from PEA. Besides the yearning, unrequited love can pose serious health consequences such as depression or chronic fatigue.

So in the face of heartbreak, when we lose physical and emotional contact with someone, we are sent into a neurological spiral, desperately trying to get a hit of that glistening dopamine. Fortunately it is possible to get a rush of PEA and dopamine from other sources, notably cheese and chocolate, yet our body breaks these down quickly and the effect isn’t quite as long lasting.

Neurological research provides a deeper insight into the science of heartbreak. In one study, heartbroken participants are shown photographs of the partners that rejected them, their brain activity is then recorded via MRI imaging. It concluded that the brain registers the emotional pain of heartbreak in the same way as physical pain.

In fact, when we are broken hearted the same area of the brain that registers thirst or drug withdrawal is also triggered. Forebrain activations associated with cocaine addiction are stimulated, a possible explanation for the obsessive behaviours often displayed when we are heartbroken: checking to see if your ex has seen your Instagram story or been active online.

In another study, participants who had recently experienced an unwanted break-up were given a placebo nasal spray that the scientists claimed to reduce negative emotional pain. When measuring the responses in the brain, throughout the group there was a reduction in both emotional and social pain. This would suggest that simply believing you are getting over an ex can reduce your perception of the pain – a fake it till you make it situation.

Breaking down the enigma of love and emotions into chemicals doesn’t feel particularly romantic, but sometimes the knowledge that you’re not irrational for feeling how you do – that it is just a part of your biological make-up – is all the reassurance you need.